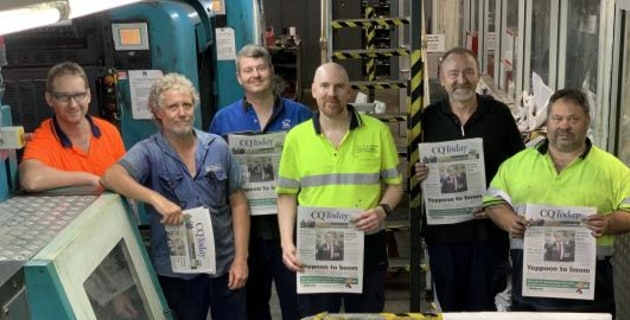 Almost a year after News Ltd closed its Kawana print center in Rockhampton, the plant is back in business, under new owners Today Group, again producing newspapers.

The print center houses a six-tower, two-folder Manugraph and Muller Martini inserter equipment, which is working again, printing for Today Group and other publishers. The press line is capable of printing 48pp newspapers in a single color pass.

Dave Richardson, managing director, said: ‘It’s good news that the press is working again. Today he used presses in Townsville for his papers.

Today Group emerged when News pulled out, the company formed with backing from Star News, which publishes newspapers in Queensland and Victoria. Backers include Bruce Allen, Damien Morgan and Paul Thomas of the Star News Group.

The Kawana site will print Today Group newspapers from across Queensland, including mastheads from Bundaberg, Gympie, Noosa, Burnett and Kingaroy, as well as the group’s latest newspaper, Ipswich todaylaunched last month.

The current Rockhampton factory was opened in 2008, but there has been a newspaper factory in the town since the war.

The site was rendered inactive when News cut swaths of its print community newspaper portfolio when Covid hit, but the new owner is launching its own newspapers and will print for other publishers.

Queensland is experiencing a revival of print newspapers, including newspapers such as the News from Noosawhich had to be printed at ACM’s site in North Richmond and then transported by truck.

Some 34 workers lost their jobs when News closed the Rockhampton plant last June, but ten have now been taken on.

Newspaper printing was decimated last year. Six of the nine ACM factories it inherited when buying regional business Fairfax/Nine have been closed, with the crown jewel of the North Richmond site due to close in July. News Ltd is currently in the process of closing its Brisbane site and sending all work to its Sunshine Coast factory. Several other newspaper factories have closed since last March.

2021-05-21
Previous Post: Tired of being a scapegoat: NHA board representatives respond to allegations and newspaper reports
Next Post: Alexei Navalny accuses prison of cutting newspaper articles and withholding books