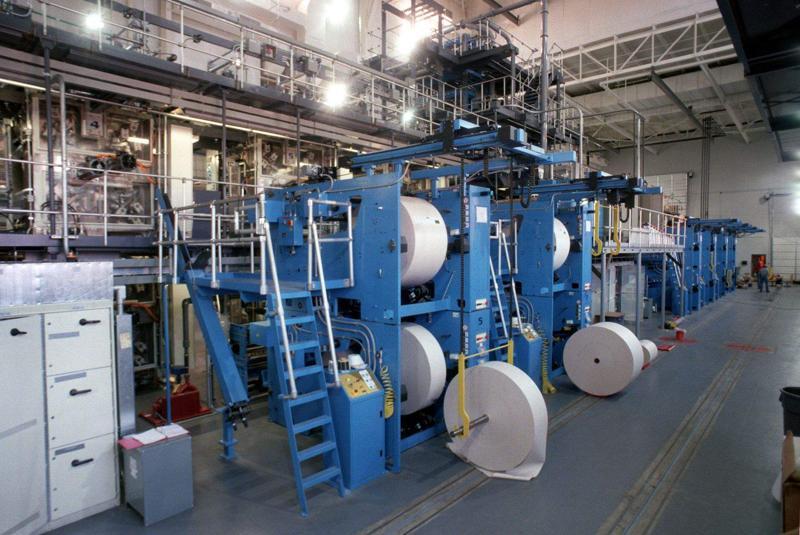 Part of the Goss press at Color Web Printers in Cedar Rapids. (The Gazette)

CEDAR RAPIDS – The Gazette will shift nightly printing of its newspaper to Des Moines next month following the decision to cease newspaper printing operations at Color Web Printers.

The decision was communicated to employees this week. The closure of the newspaper printing plant affects 34 full-time and eight part-time employees of the printing plant, 4700 Bowling St. SW. Affected employees will receive outplacement and other transition support.

The change is due to increased printing consolidation across the industry and the end of several long-term printing contracts.

“This was a very difficult decision, as it affects our fellow salaried owners, many of whom are long-time employees,” said Folience CEO Daniel Goldstein. “But economic developments and the consolidation of the printing industry demand it.”

The digital print production operation – as well as the distribution teams – have not been affected by the closure and will continue to operate at the Bowling Street facility until a future location is identified.

Printing will be transferred to Gannett Publishing Services in Des Moines, which publishes The Des Moines Register, Kansas City Star and other publications. The Gazette — along with the Pennysaver, Southeast Iowa Union and associated buyers — will go to print in Des Moines for the first time with the Aug. 26 edition.

The Gazette will adjust its overnight press time of around 90 minutes most nights to accommodate the changes, although delivery times will remain unchanged.

“We remain as committed to serving the local community as ever and are planning changes that should increase content in certain areas of the newspaper. We will detail some of these changes closer to the transition date,” said the editor of the Gazette, Zack Kucharski “We will also use our digital platforms thegazette.com and Green Gazette to ensure readers have access to the latest news and sports.”

At least 10 other newspapers have announced printing outsourcing deals so far in 2021, according to News & Tech, a print trade publication. This is after more than 19 in 2019.

“While having a printing press on the street is undoubtedly convenient, it absolutely comes at a cost,” said Kelly Homewood, Gazette’s chief operating officer. “This is an essential step as we work to position the media business for what is a digital future.”

Folience is the parent company of The Gazette and Color Web Printers in Cedar Rapids, Southeast Iowa Union in Washington, Life Line Emergency Vehicles in Sumner, and Cimarron Trailers in Chickasha, Okla.

Sections of a newspaper printed earlier in the day are rolled together to be inserted into the rest of the paper later at Color Web Printers in Cedar Rapids. (The Gazette)